IT is difficult to this outsider to understand how even a small number of Church of Scotland ministers favours independence, or how “Christians for Independence” is not a contradiction in terms (“Dozens of Kirk ministers backing independence”, The Herald, August 25).

What part of “love thy neighbour as thyself'” do they not understand? I have checked it this morning: my King James Bible does not go on to say “except thy closest neighbour, and not beyond Berwick”.

Today, a friend tweeted that he would be bowing off twitter for a few weeks; this follows others of my acquaintance in the No camp who have done likewise.

It is not my intention to do so (at least not completely) but you should know the reasons why people feel this way.

It is your right to disagree with anyone.

However, you might like to consider that you may be mistaken to characterise those who disagree with you as “a wanker, a racist, a snob, a Quisling, a fascist, a warmonger, a coward, an idiot, a liar, uncaring of the poor, and someone who would have kept Nelson Mandela in prison” and to hold us responsible for the global banking crisis, the MPs expenses scandal and NHS privatisation in England. (Also please leave the c-word to the literate, like the Earl of Rochester)

Please just consider that like me, they might be better described as “a social democrat who prefers devolution to independence.”

By the way, please feel free to describe me as an apologist for the invasion of Iraq. See my blog on the subject here. Since then, I continue to agree with the forces of democracy and freedom in Iraq who also supported the invasion, above all the Kurdish people who again face dire peril, this time from ISIS.

And a message to mainstream/official Yes Campaign:

In the course of a conversation about friends and comrades who have quit Twitter completely, I stumbled on the phrase “like a 24 hours a day argument with a Trot.” At this point, the light-bulb went on: that is exactly what it is like, and in some cases, exactly what it is.

Like Militant and other far-left groups who infiltrated the Labour Party in the 1970s and 80s, many Yessers are in the grip of cult-like certainty and do not shrink from intimidation in word and deed.

One manifestation of this is the behaviour of your Yes supporters in public, which has consistently included an element of intimidation. This ranges from the picketing and disruption which makes the arrangement of Better Together meetings difficult, to the hostile mobs which greet Jim Murphy on the streets of Scotland. Here is an example which features official Yes blue jackets.

People now openly talk of not putting No posters in their houses for fear of having their windows put in; and you have surely heard of cars bearing No stickers being vandalised

So, please be careful who welcome into your Yes camp. They do your cause no good and shame Scotland.

You may also wish to reflect on the experience of the Labour Party and the Militant Tendency. Militant’s aim was to destroy the Labour Party by implosion, and to replace it as the party of the British working class. So do not be surprised if your far-left adherents follow the same pattern. The signs are as follows:

These are then followed by denunciation of aims and leaders of the cause when miraculous results do not appear. So watch out after 18th September, whatever the outcome. You are being taken for  “useful idiots” and being supported by the leftists “like a rope supports the hanged man” as Lenin also puts it.

To everyone else, by the way:

I am not stopping using this blog and the letters pages to campaign for No. Just today (Saturday 23rd August) I have written to the Herald on the subject of Yes intimidation.

I will just be taking a lower profile on Twitter. I have – maybe belatedly – remembered the wise words that it is best to avoid arguing with an idiot in public, as onlookers may not be able to tell the difference.

At the same time, my admiration for those with more stamina in the NO camp is enormous.

Finally, to the cybernats once more:

Three words, two of which are “get” and “to”. I feel better for that.

You really wonder at some people’s lack of knowledge sometimes. And that the press indulges them. And will not publish refutation.

We have had Alex Salmond havering about aliens and driving on the righthand side of the road, and scaremongering about NHS budgets, but now we have the most truly preposterous claim by the Yes Campaign so far: Mr Bill Ward tells us that Donald Dewar might well have been a Yes supporter.

I knew Donald: I worked with him on local government issues in opposition. He kindly agreed to speak at Fabian Society meetings which I organised. He was my MP. I attended his funeral.

Many knew him better than I did, and I am sure that like me, not one of them ever heard Donald make a single statement which could be interpreted as support for Scottish independence – indeed, his opposition to it was legendary, which put him in a very special place in nationalist demonology.

To him, there was no question that devolution was unfinished business or a halfway house to independence: it was – as it remains – an end in its own right, whereby Scotland governs its own affairs within the UK. I am sure that Donald would have employed a characteristically inventive and scathing response to any such suggestion otherwise.

The rest of us should reflect on just how deluded Yes supporters are by their irrational faith in their misguided cause, and wonder what they will claim next. The support of Norman and Janey Buchan maybe?

Cannot let this rest. Yes lies about the NHS need to be exposed.

They say that imitation is the sincerest form of flattery, and the latest turn of the independence referendum shows it to be true, as the Yes campaign has borrowed one of New Labour’s best tricks.

Those of us with long memories will recall various bye-election campaigns in Tony Blair’s spell as Leader of the Opposition when Peter Mandelson would run a last-week leaflet bearing the headline “One Week To Save Our NHS/Hospitals” etc.

This would appeal to the natural concerns of the local public who would then turn out to defeat the hapless Tory candidate who would be left shaking their head in bewilderment.

The Yes Campaign is now playing the same game, but with an important difference: where the New Labour case was based on genuine concerns, the Nationalists are spreading a pack of lies.

YOU report Alasdair Gray as telling his audience: “This will be the third referendum, and at each of the past referendums, the vote for Scottish independence has increased” (“Gray encouraged by No camp’s promises”, The Herald, August 14).

For a polymath, this is surprising ignorance, as the two previous referendums were, in fact, both on proposals for devolution.

Nor is this mere pedantry, unless the verdict of the Scottish public is to be dismissed as a matter of mere mistaken identity, or that the settled will of the Scottish people for devolution was not that at all, but a Trojan Horse for independence (which was certainly not on the ballot paper).

On the contrary, in 1997 the people of Scotland voted for – and the late Donald Dewar and the Labour Government delivered – a Scottish Parliament with powers over Scotland’s domestic affairs, services and institutions, supported by and within the shared security and responsibilities of the United Kingdom. The devolution referendum was specifically a vote for the best of both worlds.

A Yes vote would be an insult to the memory of Donald Dewar and to so many others who campaigned for devolution as a rational and practical alternative to independence. Conversely, a No vote is the only vote which accepts and honours their efforts, and the verdict of Scots in those earlier referendums.

Tell us what you think

We have not provided a long list of questions to answer, but we do want to hear what you have to say about some themes.  Please respond to as few or as many as you wish.  However, it would be helpful to keep your overall response to eight pages or less.

Please provide evidence or examples in support of what you say.  This will help us understand and explore your ideas further.

On 23rd July I sent a copy of the attached poster to Scottish Women’s Aid in the following terms:

I would be grateful if you could let me know your views on the comparisons
being made by Yes Scotland between the UK and an abusive relationship. I
enclose a link which illustrates my point: 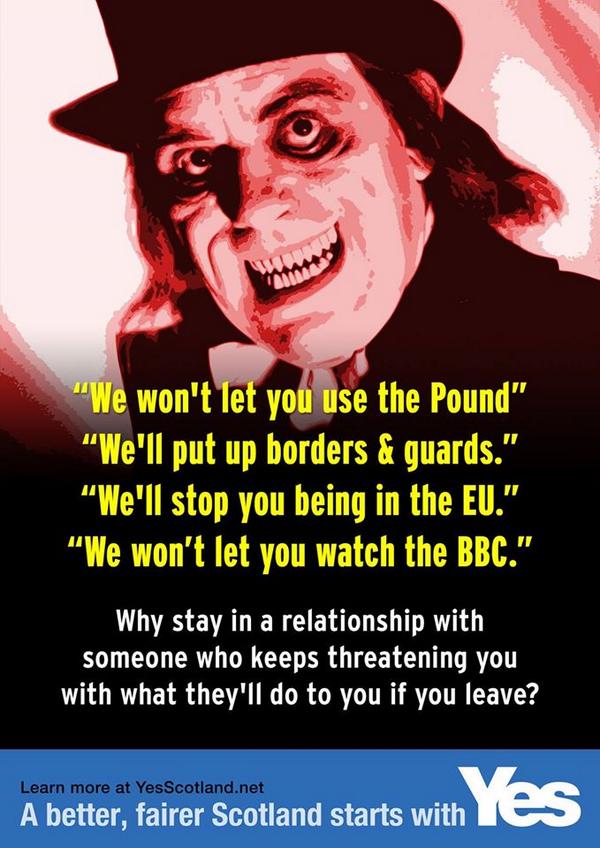 I have never been in an abusive relationship, but members of my family
were (in the 1970s)and I find the comparison offensive and inaccurate.

I received the following reply on 28th July:

Thank you for your e-mail. And bringing this poster to our attention.
We agree that the poster does use an inappropriate and offensive comparison to someone living with domestic abuse. However, we have checked and this poster was not produced by the official Yes Scotland campaign, but by an individual. We have sent an e-mail to the official yes campaign to alert them to this.

Hopefully this will put a stop to such offensive garbage ever being peddled again.